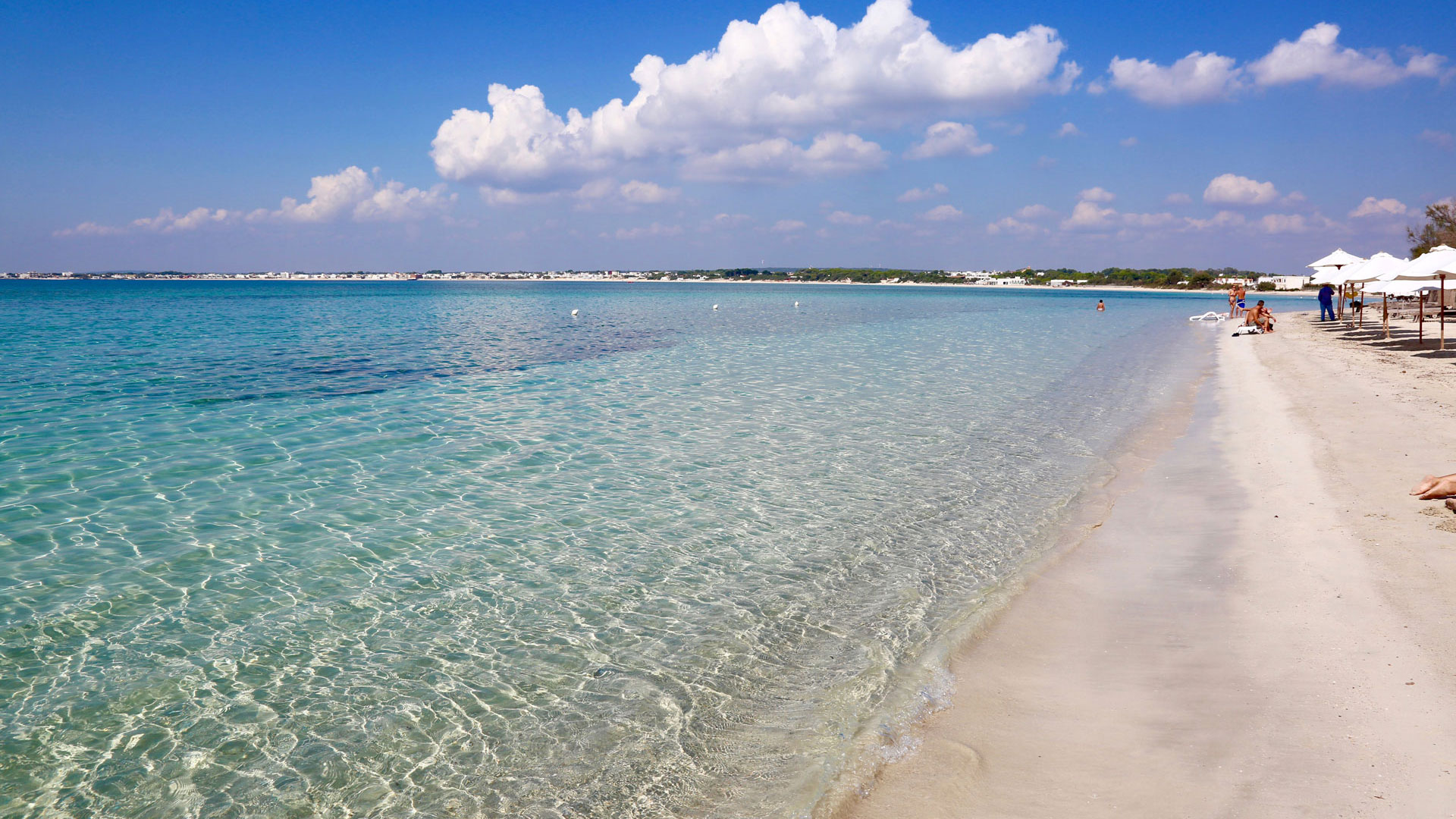 The most beautiful beaches of Salento

Photos of some paradisiacal beaches of Salento

Italian language school by the sea in Italy: the most gorgeous beaches of Salentine peninsula (Apulian coast)

Italian language school by the sea: the most gorgeous beaches of Apulian coast

By choosing for your holidays an Italian language school by the sea in Italy,  you can combine the Italian course with the opportunity to enjoy the wonderful Italian beaches and to know the beautiful historic seaside city of Otranto. If you choose to learn Italian by the sea you don’t need to take a bus or other transport because you can walk to the beach or rocks. Otranto and Apulian coast offer an excellent opportunity to learn Italian by the sea and at the same time to take a vacation visiting different beaches every day.

The beaches of Puglia and the seaside resorts of the Apulian coastline have a special charm throughout the year, from the euphoria of summer to the calm of winter. So you can choose a course by our Italian language school by the sea in any period of the year.

If you choose an Italian language course by the sea you will have the opportunity to feel the warm embrace of these hospitable sea resorts. Enjoy the gentle rhythm of life by the sea, where the passing of time is still articulated by fishing rituals. Admire the breathtaking sunsets in one of the characteristic small harbors as the sun plunges behind the boats.

Learn Italian by the sea in Puglia: a magic region with a unspoiled landscape

Nature has been generous to the seaside and the hospitality of Puglia’s people completes the picture.
Discover the sea’s surprises: secret bays and hidden caves.
Puglia’s sea is an ongoing surprise. Navigate through concealed clefts and hidden inlets, and follow the coastline with its islands and caves.
Plunge into pristine landscapes, lie on the golden bay sands, and enjoy amazing lightshows as sunbeams are reflected off the water onto the walls of caves overlooking the sea. A whole underwater universe with galaxies of starfish is just waiting to be discovered.

If you decide to learn Italian by the sea you will enjoy the splendid sun of Puglia on the beaches of Gallipoli, Porto Cesareo and Otranto during your vacation in Puglia!

Feel the warm embrace of these hospitable seaside resorts! Enjoy the gentle rhythm of life by the sea, where the passage of time is still marked by fishing rituals! Admire the breathtaking sunsets in one of the characteristic harbors as the sun plunges behind the boats.
Nature has been generous towards the Puglia sea and the hospitality of the Apulian people completes the picture.

The sea of Puglia is a continuous surprise: secret bays and hidden caves. Dive into unspoiled landscapes, lie on the golden sands of the small bays and enjoy fantastic light shows, while the sun’s rays are reflected on the water and on the walls of the caves overlooking the sea. An entire underwater universe with myriad starfish is just waiting to be discovered.

Here you will find a list of the most gorgeous beaches

Gallipoli is one of the most appreciated and popular beaches of the coast. It looks like a several kilometers long beach, characterized by fine and clear sand, lapped by a turquoise sea.

The first impression is to be arrived in a tropical beach, thanks to the clear water and the white sand. The beach of Porto Cesareo has a very shallow sea bed, and allows you to walk to the island of rabbits overlooked. Marine protected area, it is reacheable within walking distance along the 200 meters that separes it from the beach; the water is about 1,5 meters deep. You can enjoy great peaceful moments and maybe even make a picnic.

One of the longest beaches in the Salento area (Southern Puglia). The sea is crystal azure.

Ideal for the adventurous – we don’t recommend it for families with kids. The sea is teeming with fish.

Small beaches with clear water. We recommend for families.

When they come here, many Italians maintain that Italy has beaches to rival the Caribbean. The waters are clean and clear with colours running the gamut from blue to green.

The name does not disappoint: the blue sea, the white sand really give the impression to be at the Maldives. The sea bed is shallow here and there are small islands emerging from the clear waters. All around, the dunes are covered with tamarisk and acacia trees, which surround this paradise.

Situated in a small village of the Salento area, this beach takes its name from the ruins of a watch tower. Easy to reach and with plentiful parking.

If you choose a course by our Italian language school at the seaside you will have the possibility to go to the beaches by foot. Any bus or car. Otranto is on the coast and it is surrounded by wonderful beaches:

The Baia dei Turchi is a white beach nestled in the rock while behind unfolds the scent of the Mediterranean.

At about 5 Km from Otranto, Alimini beach faces the homonymus lakes, which is part of the marine protected area. The long beach is characterized by white sand dunes separating the beach from the promenade, and a rich Mediterranean vegetation which hosts, among others, endangered species.

A tiny tourist port excavated in the soft calcareous rock, has been awarded the Blue Flag and 5 Sails (a flag awarded to the most beautiful beaches) of Legambiente (Italian environment protection association), as all the marinas of Melendugno.

The small sandy and public beach, nestled in a small rocky bay, lapped by the crystal clear water, offers a wild and unspoiled landscape. In the north and in the south of the bay, the sea stacks, shaped by the water, come out of the crystal clear sea, creating a magical atmosphere. This part of the coast is also jagged, full of caves and small caves to visit.

The Adriatic coast of Salento offers the most beautiful beaches of Apulia, lapped by a clear blue sea whose incredible transparency is often compared to tropical scenery. Conca Specchiulla is one of these. The sand is fine with a typical silvery-white color, the waters are crystal clear and often framed by dramatic cliffs and stretches of green pine forest.

A spectacular spot marked by a cave some 5 m high looking out to sea. You can either swim as far as the cave or reach it by boat. Have a great adventure!

This beach takes its name from the two stone pillars which emerge from the sea, and offers both sand and rocks.

An inlet with a sandy beach and rocks by the side. According to the Roman writer Virgil, it was here that Aeneas fleeing from the city of Troy landed. We suggest you rent a paddle boat to explore the coast and nearby bays.

The beach takes name from the sulphurous waters that characterize the many surrounding caves. Santa Cesarea Terme is mainly rocky, suitable for those who love rocks, small pools created by the rocks which surround the blue and turquoise sea.

The beautiful Castro is imbued with history and legends. It is perched on a cliff, overlooking the Adriatic Sea, stretching towards the sea, it becomes a marina awarded the Blue Flag.
A trip here could include a visit to the nearby Grotta Zinzulusa, one of Salento’s most impressive karstic phenomena.

A small bay you can reach along a pathway in about 7 minutes. The beach is free and has many points for diving. There is a kiosk from which to hire sun beds or take a drink.

The beautiful village of Leuca, whose name comes from the Greek “leucos”, white, can be admired from above and it displays its horizon dotted with white calcareous rocks. The jagged coast of Leuca belongs to the Regional Nature Park Coast Otranto – Santa Maria di Leuca – Bosco di Tricase and is embellished with natural caves, reachable by sea. The local fishermen know every legend and the origins of these caves, which have curious names.

APPLY NOW !
SEND US AN E-MAIL

For each enrollment or school donate 5 euros to Big Fix Uganda (click here for info).
The Comfort Dog Project is our Animal Assisted Intervention program which integrates psycho-social counseling with dog companionship to help people suffering from post-traumatic stress disorder.